Two young fish are swimming along when an old, wise fish swims up to them and says, "So boys, how's the water?" They swim a little longer before one of them finally says to the other, “What is water?”

At the K12 Facilities Forum, architect Barry Svigals shared this story to illustrate that the waters around us, our attitudes and biases, are so ubiquitous that we can’t even see them. In fact, the most obvious, important realities can be hardest to talk about.

This lesson was driven home for Svigals + Partners in 2013 when the team received the RFP to rebuild the new Sandy Hook Elementary School, six months after the tragic shooting took place. Surrounding all the efforts to rebuild was the community’s decision to choose the waters of love in response, and that choice influenced the entire process.

According to Svigals, it's not just what we do, but how we participate.

The Importance of Process

It was around 20 years ago, when working on the University of Connecticut’s $2.2 billion master plan, that Svigals and his team realized they were not experts in collaboration despite their previously held belief that they were really good at it. In fact, they couldn’t see the “water" of all their preconceptions, which were in the way of working creatively with others as well as seeing what was truly needed.

“Two decades ago, there was far less emphasis on collaboration and innovation. Even just six years ago, just one of the titles in the Harvard Business Review had the word “innovation” in the title,” Svigals said.

The UConn master plan process revealed to the team that collaboration was essential, and three main lessons emerged...

“If we're honest with ourselves, we don't know how we are. And we don't know how to respond or what’s needed,” Svigals said. “In fact, our expertise can even get in the way of us making truly innovative decisions.”

If we already know the next step, it's not innovation.

“How can we be free enough to leave a space for that not knowing?” Svigals said. "No one can sit on the sidelines--there’s no audience. We’re all in it together."

The power of process once again came to light when the team received the request to build the new Sandy Hook. “We had to admit we didn't know what was needed, and neither did they,” said Svigals.

They couldn’t approach the decisions that needed to be made without a process where people felt like part of a community. To create an atmosphere of trust, the first meeting included 50 people and opened with the question: “What do you love about your home and community?”

In the face of what had happened, this reminder was important...and the result was nothing short of extraordinary.

“In those three hours, that dynamic changed the course of everything that happened after,” Svigals said. “They talked from the heart, and people heard each other. On an everyday level, we are always in circumstances where we’re supposed to listen, but we do it poorly.”

Svigals emphasized that real listening comes when people speak from a place that isn't habitual. It's important to actively remember that we don't know what's needed to find what the actual need is.

“We feel it, it’s transformative, and it creates circumstances to have a totally different conversation,” Svigals said. “We don’t have to spill our guts each time, but we can simply be more intentional about getting off the railroad track of thinking only about the result. The school will be a manifestation of whatever the process is.”

The process centered around remembering the community. An image of the buildings rising out of the hills of Newtown resonated with many, leading it to be incorporated into the design. The river that runs through the town and the bridges that cross them also struck a chord, causing the creation of metaphoric bridges into the school. The end product ended up featuring tree courtyards and a quiet area designed to look like a tree house. Lobby of the school (via Mark Lennihan/AP Images).

Students played a helping hand in the design as well. “We empowered them to share their creativity and tell us what they wanted the school to be like. The kindergartners were fabulous,” Svigals said.

The school was designed with the healing effects of nature front of mind, and the team enjoyed an art exercise where children illuminated leaves with flashlights and drew them. These drawings were translated to carvings that ended up in the design, deepening the connection for the kids.

All in all, the entire design process took about 10 months before construction began, with the first month entirely devoted to exploring these defining characteristics. The 86,000 sq. ft building is designed to look lovely and whimsical, but the security features are second to none, including an elevated ground floor to make seeing inside the classrooms difficult, a video monitoring system, bulletproof doors, and more.

Svigals believes that often, we don't involve enough of the building's users in our process--and this creates a huge missed opportunity.

As a student, Svigals had a friend who worked for I.M. Pei during the planning of the East Wing of the National Gallery. Pei pulled in close to 500 people who were going to work on the building together into an auditorium to bring them into the process of what it means to make a museum. It’s no surprise the team was exceptionally loyal, often staying three hours after their shift ended.

“Can you imagine being brought into a meeting like this, where the greatest architect in the world thanked you for being there and asked for your help to make a gift for the American people?” Svigals said. “People wish to serve, but they need to hear the call. You must recognize that something is needed. If people feel connected, they’ll really work for you.”

Svigals felt inclusion was just as important in the Sandy Hook project, and brought back the contractors and site-work crews who were there at the beginning. Seeing the school up and running proved to be an emotional experience. With tears in his eyes, the owner of the company that laid the pipes said to Svigals, “I never see the schools that I contribute to. I'm never shown what they're about and this is so meaningful to me.” 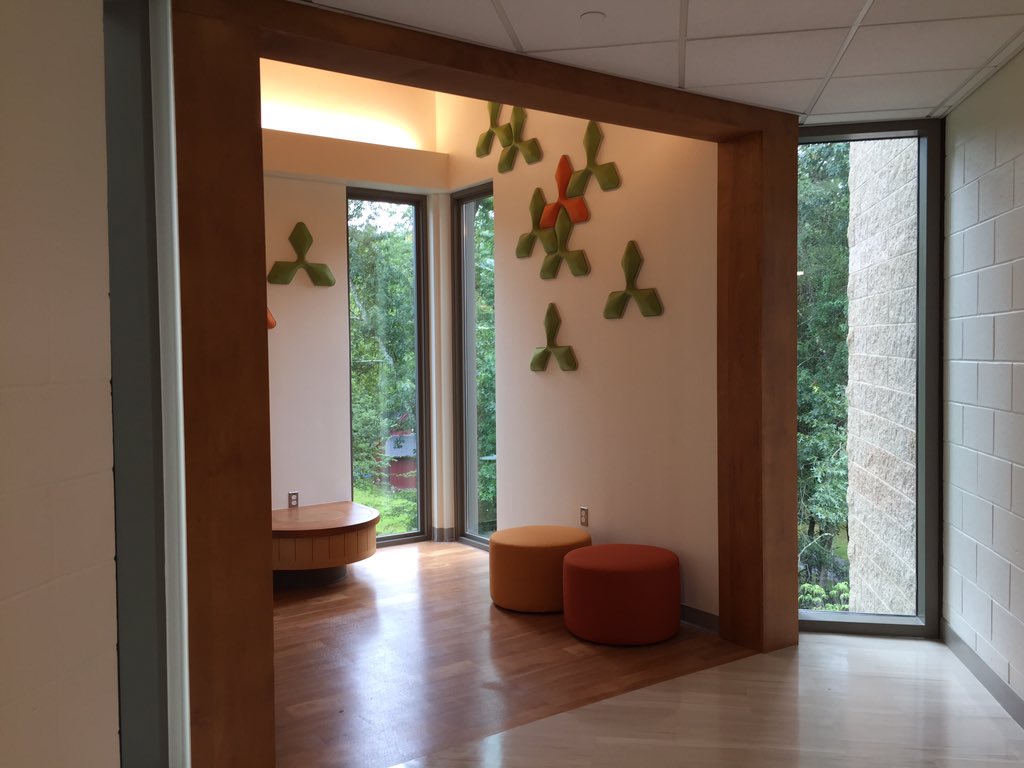 A space called the Treehouse overlooks nearby woods (photo via Estaban Hernandez).

The leadership of Newtown’s First Selectman, Pat Llodra, was also vital in helping the community endure with resilience, as she brought a calm intelligence, the care and love for this community that brought everyone together.

Llodra addressed the group of workers in the auditorium that day with a powerful message: “You have no idea what this means to this community. It's like a phoenix rising from the ashes. My wish is that the love you have for what you do will be in this building, and when kids come to learn, they will feel that love.”

“How she was mattered throughout this entire process,” Svigals said. “If you care about what it is you do, it can be transformative for everyone else. It’s all a circle. All of you who are involved in schools are touching so many different people. The things you embody resonate with others and make a difference.”

It's About More Than the Destination

At the end of the day, we all want to provide a wonderful, safe place for children to learn and grow. In pursuit of that, we focus a great deal of our attention on the description of how these places need to perform in design and construction and spend less time on the process that brings these descriptions to life,

We spend even less time considering how we are ourselves, as individuals, contribute to that process.

However, Svigals' illuminating story made it clear that how we participate truly impacts the creation of our learning environments. That is to say, how we are matters.