Schools are our children’s home away from home—safe and reliable places that can always be counted on for support. This is why they must be strong enough to make it through extreme events like hurricanes and floods. So how can we ensure that schools are prepared to stand against even the worst natural disasters?

At the K12 Facilities Forum, leaders of two of the largest school districts in Texas teamed up to discuss how they tackled the challenge of Hurricane Harvey. These speakers were Alishia Jolivette, Officer of Facilities Services at Houston ISD, and Roy Sprague, Cypress-Fairbanks ISD Associate Superintendent for Facilities, Construction & Support Services.

In their talk, Jolivette and Sprague shared their toughest moments and most successful strategies with the hope that their experiences could help other K12 facilities leaders get their schools through similar disasters.

Preparing for the Hurricane

Houston ISD ranks as the largest district in Texas, while Cypress-Fairbanks ISD comes in third. Combined, the two districts are responsible for over 330,000 students and 378 different schools. The sheer size of each district made effective preparation a must if they hoped to come out of the hurricane with minimal damage and disruption.

Both districts set up their communication protocols with leadership and also coordinated with outside authorities. CFISD established communications with the local police, who were prepared to relay information about which roads and buildings became flooded as the storm took its course. 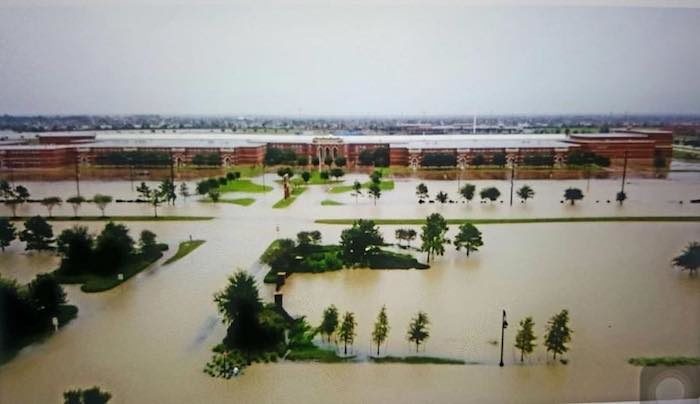 A high school in CFISD was completely surrounded by water.

The districts took many other preparatory measures in the days before the storm hit:

Jolivette and Sprague agreed on the importance of ensuring that recovery teams would be ready to mobilize as soon as the storm passed.

CFISD secured the services of roofers, electricians, and other contractors beforehand, that way they’d be able to immediately start any necessary repairs. HSID contracted remediation teams to stay on site at various campuses throughout the storm. This was done to mitigate flooding and other damage as it occurred, as well as have the teams action-ready at the storm’s end.

As the storm raged, both districts logged into security camera systems to check the status of each facility. They maintained in constant communication with district executives, city officials, and police departments.

HSID’s remediation and emergency response teams reported power and network outages at many sites, as well as water intrusions. Flooding in some of the schools got so bad that HSID had to coordinate rescues of on-site team members.

By the end of the storm, almost 290 schools between the districts had suffered from water intrusion. One tornado even caused damage to seven of CFISD’s campuses. In total, at least 75 HSID schools and 1 CFISD school had major damage that would require renovation and/or rebuilding.

At the hurricane’s end, the two districts had to quickly start site assessments. In some cases, floodwaters on access roads required the teams to wait days before they could safely get inside the schools and record the damage that had been done. They determined what schools would need to be closed for repairs and remediation, and to what extent those overhauls would be. In some cases, complete rebuilds were necessary and are currently underway.

Additionally, the districts had to identify what facilities could be used to accommodate displaced students. The districts repurposed middle and high schools to accommodate younger children coming from elementary schools, a task that required some renovations.

The local communities relied heavily upon the school districts in the days and weeks following the hurricane. In addition to using their own resources, they obtained donations from big companies like WalMart and H-E-B, which allowed them to effectively supply community members with food, water, backpacks, clothing, and other much-needed supplies.

During the course of the storm and recovery period, the two districts learned a lot about ways that they could do better in the next emergency scenario.

Sprague talked about how CFISD ran into sewage problems that could have been avoided with proper preparation.

Local sewage systems had flooded, prompting authorities to issue notices that the schools could not use their sewage systems until the problem was resolved. The district didn’t secure portable toilets beforehand, so procuring them after the storm was extremely difficult. This meant that the district had to roll back it's school start date so that they could arrange for toilet facilities to be ready. 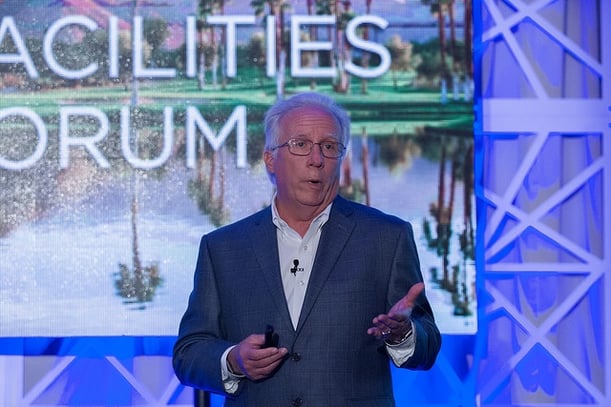 One of Jolivette’s most important lessons learned wasn’t about logistics, but about simply taking moments to calm down and gather strength:

“Breathe. I know a lot of times when you’re in an emergency or disaster situation, you tend to scream, and you start running, and you panic. Well, at one point I looked at the team. They had been there for what was going on our fifth day… there was nothing else I could do for the team. I had to step out, I had to breathe, and I had to walk back in. We played cards. I did thank them for everything that they had done, the sacrifice they made, the commitment that they made.

Just breathe in the event of a disaster. You have to take time to breathe.”

Toward the end of their talk, the duo provided a list of strategies that other educational facilities can use to prepare and respond effectively to disaster scenarios. Many of their points are laid out below.

Learning from Jolivette and Sprague’s experiences, the leaders of other K12 facilities around the country can prepare themselves to hold out against natural disasters and become a source of strength for their local communities.